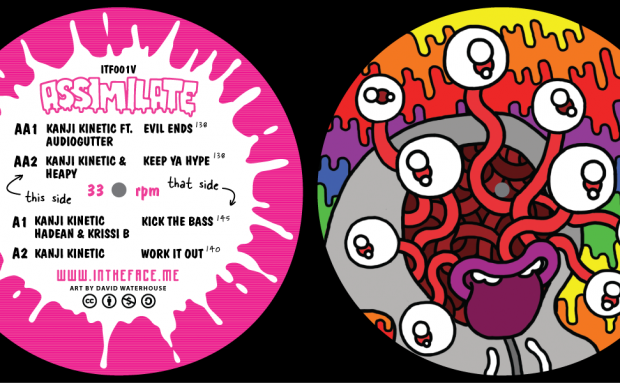 Our first release, Assimilate, out now and features 4 massive all-star collaborations between Kanji, northern bassline legend Krissi B, Wigan’s Heapy, Audiogutter and our own resident DJ and producer Hadean, combining bassline, rave and breakbeat into one dancefloor destroying record.

We’ve sold out of the vinyl but fortunately it looks like you can still buy it from a number of places in the UK, or from Toolbox Records if you’re in Europe/Rest of the World.

The digital release is still available from our releases page, or from a number of digital stores such as Boomkat & Juno Download.

Amazing release. I just bought it. Just curious when I will get the download links. Thanks!

Thanks! There’s a little pink slip that will arrive with the vinyl. Will get it sent out tomorrow for ya 🙂

no digital version yet? 🙁

[…] of our first release is over. ITF001 hits general release on the 11th March. Pre-order it on vinyl here (only a fiver!) or hold till then for the digital […]

[…] and original tracks for labels such as Northern Line Records, FDB Records,  Mutant Bass Records, In The Face Records, Rampant Records, Kiosk Records as well as own label Krissi B Sound, so hours of endless basslines […]