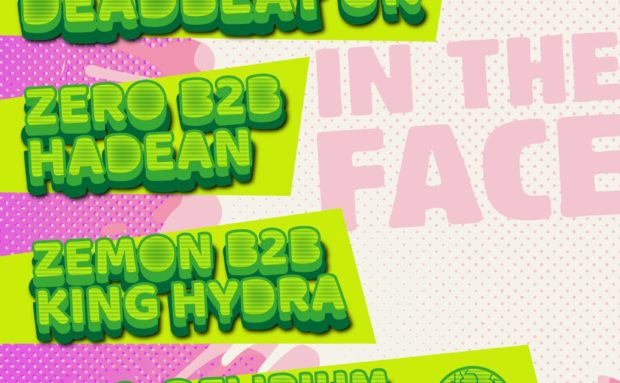 In The Face presents b2b madness: Getting together some of basslines biggest names we are going full niche with this one with bassline legends Mr V b2b DJEJ, and new guard Deadbeat UK b2b Thorpey, plus residents Hadean & King Hydra going b2b with Zero & Zemon, the night is gonna be a madness!

DJEJ B2B MR V
(Crucast)
Two absolute legends of the scene team up for the headline back to back, EJ is an absolutely legendary DJ and famous for the EJucation mix series, he is someone who introduced so many to that classic sound, Mr V is a prominent producer and has been around since day, most notable for the absolute classic Hypotiq, which has been dropped at many an In The Face by us!


DEADBEAT_UK B2B THORPEY
(Tumble Audio/Off Me Nut)
Two pioneers of the modern sound and scene heavyweights join forces for the second b2b, both are prolific producers and have played In The Face many times, heavy basslines and stomping warpers, listen to anything online for a taste of the bass


HADEAN B2B ZERO
(Tumble Audio/Saucy/In The Face)
Newcomer Zero joins Hadean in the mix, he has been making waves with releases on Gassed, Saucy & local label Southpoint among others, combining 4×4 beats with neuro sounds to great effect, joining him resident Hadean will of course be providing some serious In The Face warpers


KING HYDRA B2B ZEMON
(Hot Cakes Bass/In The Face)
In The Face residents King Hydra have been making waves recently with a Hot Cakes release and Ed Solo remix, and are joined by Zemon, who helped run In The Face Berlin and produced the latest In The Face release Soulman

DELIRIUM DNB TAKEOVER
This night has been going from strength to strength in the last year bringing some of the freshest dnb to Volks, such as Emperor and Jubei. Their floorkilling residents will be providing the sounds in room 2 all night!