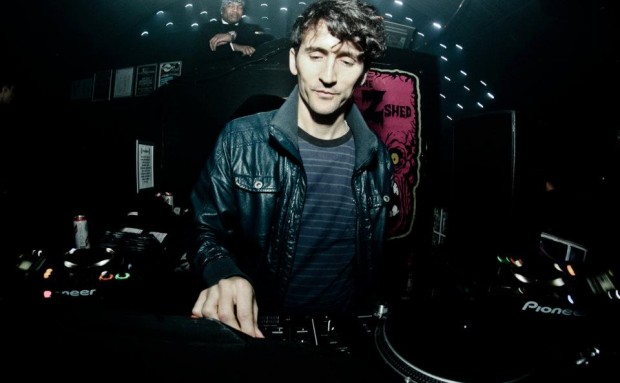 For those that don’t know Warlock you’ve been missing out! Having DJ’d everywhere for over 20 years, running the legendary Kickin Records during the 90’s and setting up his own Rag and Bone Records (releasing tracks from the likes of Starkey, King Cannibal, Drop The Lime, Kanji Kinetic, Squire of Gothos, Stagga and more) with partner No Yeah No in 2002.

The Rag and Bone show on Sub FM is a constant source of great new music and his “Out On The Lash” mix from 2008 was a massive inspiration with it’s brilliant blend of all things BASS!

You can catch Warlock alongside Rag and Bone regular Stagga at In The Face on Friday!

2- We’re really looking forward to having you and Stagga down to play, have you ever played at The Volks before?

No. I’m trying to rack my brains, I’ve had the pleasure of playing many towns and cities up and down the country but I don’t think I’ve actually ever played in Brighton. although many moons ago I did play down the road in Worthing a few times for the legendary Interdance at Sterns.

3- You’ve been involved in Dance music for over 20 years, you’ve got have some great stories! What was you’re favorite gig?

I guess there would be a few. The first ever Tribal Gathering for the sheer size. It was a marquee of 10,000 people and the dj booth was right at the top in what felt like a crows nest right at the top and centre of the arena. Amazing, though it was a bit disconnected.  Unsound for their beach parties with with their rig right on the sand pretty much at the waters edge, and non stop for 10 days. I had some very memorable sets there. The Cross Club in Prague because its interior was completely refurbished from various bits of recycled machinery and metal. Couldn’t be better as a Rag & Bone setting. It was like some kind of H R Geiger labrynthian womb. Talking of Labrynths, I guess in general I feel really honoured to have lived through the days of UK Rave Hardcore (and Acid house just about) and actually been there and been part of it. Playing places like Labrynth, Knowledge or on occasion for Spiral Tribe, all such great times. And I’m just as equally positive about the places I play today. Thoroughly enjoying being part of London Borough Of Bass and currently making plans for the next one.

4- Rag and Bone has been a constant source of interesting new music, you seem to pick artists that are relatively unheard of at the time. Has this always been a conscious decision?

Kind of. The music policy is generally of one where we try to find new and genre defying music, music that is on the frontier of new ideas, and this often (but not always) seems to come from new emerging artists that are trying to do something different to the established norm. It’s that kind of music that always excites me the most.  Its great to always think that in a few years time they’ll be yet another genre or style of music I would never have thought would come into being. I dread the day not being excited by new music, I’m pretty confident that’s not gonna happen though. We’re never against more established artists releasing with us, but in retrospect its quite rewarding seeing artists that have made their debut release with us go on to make big strides in their careers.

5- You seem to be getting a lot more music together recently, we’re particularly liking your “Space Junk” EP that’s coming soon on Rag and Bone! Can you tell us a little about your studio set up?

I’ve got the studio up and running again. The label has taken over during the last few years and it takes a lot of time and energy to make releases happen particualrly the CD albums we did last year. All this running the label has taken up the time I would have been in the studio, so I’ve taken a bit of a back seat recently to the label and got my head down in the studio. After it all, it was how the label started up so it will be nice to pepper the catalogue with some of my own productions again. Studio wise, I’m Working with Logic, and a few classic Roland synths such as the Roland 09 and the Sequential Circuits 6 Trak which is just amazing. Good for weird analog sounds and was used for a lot of the early Dr Who sounds. I’m really fortunate that the studio space I’m using used to be a mastering suite and so the room has been perfectly acoustically treated and still has the original B&W speakers which are so mighty yet have so much clarity, you hear everything. Its also got a lush Roland System 100 which I’ve been experimenting with too.

6- Anything you want to tell our readers?

Just that the future’s bright. Haha, but no seriously its never been a more exciting time for music, everything is out there on the digital frontier, amazing technology at your disposal, an internet teeming with new ideas, tonnes of music and so many new ways to connect and promote your music. And it really doesn’t matter how you play or make your music it’s all about good music. Always has been, always will be. Oh and talking of which I’ve got a new EP out called Space Junk. Right I’ll shut up.